A mockup showing clips linked between the clip launcher and the arranger.

Bitwig clips are all independent from each other which means changes to one clip cannot affect the contents of others. This can be frustrating for example if you want a repeating bassline and need to ensure all of the clips continue to play the same part by editing the clip just once.

Bitwig’s highly modular concept allows for abstract methods of creating links between otherwise separate parts of the track. For example the Audio Receiver can capture audio from any device in the project and then process and play it. Likewise with the Note Receiver which can intercept and utilise MIDI. Linked clips fits within this concept and would make producing a range of genres much easier. For example techno and house music as well as songs rely on repeating riffs which would be much easier to work with if they could be linked to each other and remain consistent.

Clips can be looped which means dragging the clip out longer than its contents will result in repetitions of the clip for the duration to which you resize it. The problem is that if you need to have a break in the part by copy/pasting or slicing it, the clips will become disassociated from each other and so changes in one will not affect the other(s).

There are ways of using MIDI loopback to trigger clips in the clip launcher and even scene changes. It’s relatively trivial to set it up but it’s not ideal as it requires a functioning and reliable virtual MIDI port. It would be a much more transparent and potentially more reliable solution if it were directly within Bitwig through clip linking.

I don’t believe so

Clip linking is a feature that exists in several DAWs including Studio One, FL Studio and Nanostudio 2 (iOS). It can be enabled in Ableton Live through a Max for Live device.

That would be very nice, I use a lot of times the same clips in a track and I’d be happy that all linked / gost clips could automatically be modified if I modify one… Until I unlink one of them to create a variation, of course !

This definitely gets my vote. It would be a nice alternative to the “blocks” mode I suggested in another post. I like the way Nanostudio 2 on iOS handles this.

This is a good proposal. I can see it’s probably going to require some thought on how this works alongside the clip launcher though. When you create a clip and activate looping, when you expand the clip it will then ghost copy the clip and if you edit the notes inside the source clip, the ghost clips update. The problem as you probably know though is the ghosting link is lost when you split the ghosted clips to begin arranging or duplicate. I guess so long as you’re aware the ghost clip can’t be dragged into the clip launcher, it’s not much of an issue theoretically.

I don’t know how this works in other DAWs but I don’t think losing the link is necessarily the case, unless I have misunderstood. If a linked clip is split, could the two now individual clips both remain linked to the source clip? 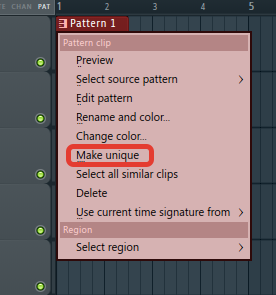 there is also something similar in Studio one 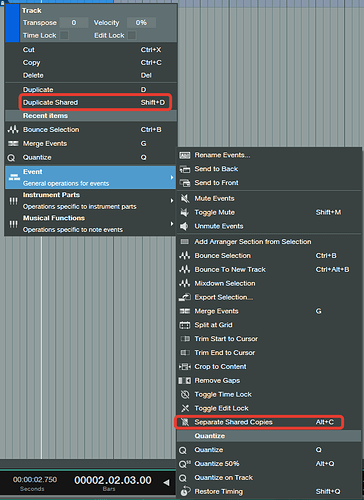 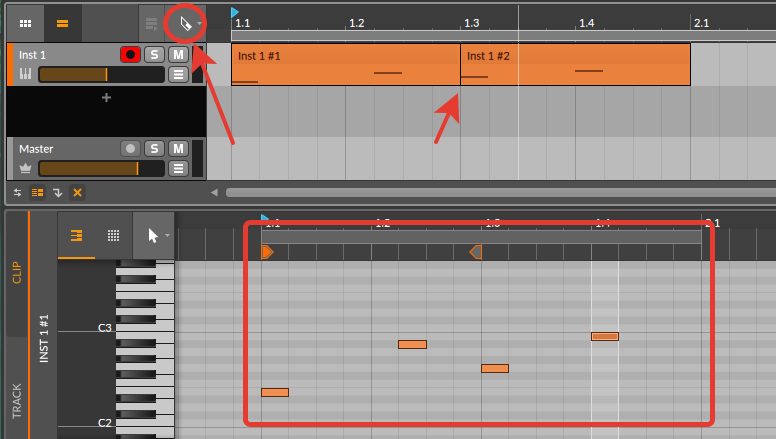 I’m in agreement about the splitting aspect. Personally I think that functionality like what you showed in FL and SO would be preferable with all duplicated/split clips linked by default, but changing this default behaviour seems like a different feature request. It would be nice to be able to choose whether or not duplicated/split clips remain linked. Could we perhaps log this as a separate feature suggestion and keep this one simply as the implementation of linked clips?

Of course, we don’t need linked clips by default like in Fl studio. This was just an example. Studio One, for example, has the ability to choose whether duplicated / split clips remain linked or not. This is shown in the screenshot above.

This! I originally started with Ableton and never understood how is this NOT the default behavior.

let’s vote which symbol is more suitable for linked clips

Agreed. This is something that should be added. Users should have a choice whether a “new” instance of a clip is associated with the common base CLIP, or if it should be a new independent instance. Audition uses this method and I’ve used it extensively.

Hi, I am switching from Fl because Bitwig seems to be a nice improvement in terms of sound design capabilities and so far so good
Now I already miss some aspects of the playlist and piano roll that behave so well in FL, like the piano roll being much smoother, ofc it’s because I’m not used to it but the selection also bothers me a little bit so would like to have the ability to customize more the piano roll and playlist behavior to make it a little bit more like FL and to no destroy all my muscle memory.
Linked clips are alsp indeed a great feature that I miss, it’s so easy in FL that it could be an option for each clip or an option for the default behavior.

I think neither. The best and easiest way to implement ‘alias’ clips in Bitwig would be using clips from Clip Launcher, so perhaps we need icon or representation that clip used from Clip Launcher instead. I think it would also be nice to combine it with features like markers/regions that start playback of a clip or scene from clip launcher and get back to arranger

Neither. I’d rather some kind of ghost like in Studio One, but it’s necessary that it also has a number next to it (or even a text label) because you can have multiple separate groups on one track, separate groups in clip launcher and arranger or even between the track (e.g. using the same MIDI to play different instruments).

given idea above it would be enough if selecting ‘alias’ clip in arranger would also select this clip in Clip Launcher so you see exact reference you’re working with.

The clips should be flashing or something, but let’s not restrict that to be used only between Launcher and Arranger. The alias groups shoule be possible between or inside of either of those views.

As an example of using both linked and independent clips, in Audition, you can determine whether a clip is an independent stand-alone copy of the original, or a linked version. In the first case, any changes made to the clip (FX, gain, pan, etc.) on a Track affects ONLY that clip. In the latter case, cleaning up noise on a clip that is used in multiple places on a timeline (think Foley clip of various footsteps, or claps) affects every clip it is linked to. When limited to independent clips, you are left with doing that noise reduction on every clip. An you can isolate a clip (i.e., make it independent) on the fly at any time.