Since Diatonic Transposer was renamed to Key Filter in 4.1, it would be appropriate if it would also allow punching in custom scales, and have diatonic modes as default ones for backwards compatibility. For custom scales it just needs to borrow pitch class buttons from Pitch Quantizer module in Grid and have it as a ‘Custom mode’ tab. Also would be really great to include pitch expression quantization option, so even pitchbends/slides are affected and constrained. 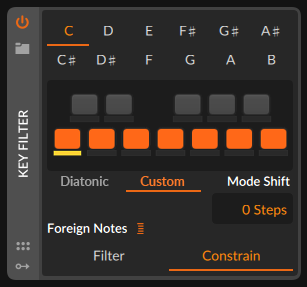 In future, if snapshot system is implemented, old Diatonic modes could be hidden away as default device snapshots 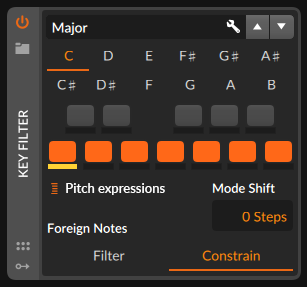 Until then we could save scales as Key Filter device presets.

A big workflow improvement for managing/switching your own scales within one device. Ability to constrain pitchbends to scale is currently practically impossible to do (outside of Grid).

Pretty well since it borrows already existing functions and UI elements that are scattered through different devices. Bitwig has put already emphasis on features that allow users to depart from the traditional Western scales and experiment with pitch.

The downsides of using these presets are a clunky UX, prominent CPU impact for what should be a very light device, and it can’t do polyphonic pitch expression quantization.

As stated above, not exactly in intended shape or performance, and still lacking in UI and features.

We haven’t seen any that would check all the boxes. Also, the downside of using a VST is that it would convert high-resolution Bitwig note data into low resolution MIDI, and then it would also have to be MPE compatible output, which doesn’t seem to be implemented anywhere.

Probably it can be done in Ableton via M4L.

@x.iso made a similar patch in Usine, which also allows using it as reference or receiving scale to chain it up with other instances of this patch. 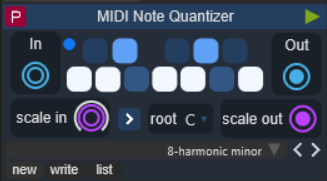 Side-note: having built-in snapshot system for this device might clash with Snapshot system feature request (not sure it was listed here yet), so the only 2 options how to resolve this I see right now are:

4 posts were split to a new topic: [Draft discussion] Key Filter device - make your own scales

Key filter device improvement seems no longer necessary, although still neat if could be implemented. but basically it’s covered by Note Grid now.

I agree. Given that making your own scales is a rather specialized activity, and given their investment in the well implemented Note Grid, it would be very logical to expect that they leave Key Filter as is, and send users with additional use cases to Note Grid.

If you want to archive this request, we can do it.

I’m thinking this either needs some rework, like scale syncing (master/slave) or other features added, but either way Note Grid does good job for that as well. so maybe we can archive this as redundant?

Given that you are the author and there are zero votes, I think this can be a quick decision. I’ll archive it. If needed, we can bring it back later.