A straightforward way to split the incoming audio into two signal chains, transient and sustain. Just like other container like Mid-Side Split or Stereo Split, this split would allow to add different devices and VSTs to the two signal chains. Timing knobs would allow to shape how the signal is split (analogous to the Transient Control device).

The implementation of this feature could be a new container device. Another possibility could be to add device chains to the Transient Control device.

In music production it is not uncommon to process the transient and/or tail portion of a sound independently. Right now Biwig doesn’t offer a way to achieve this in a simple way.

It would be a good complement to the existing containers, and a rather unique feature.

Synthorial DE recently did a tutorial (in German) for Bitwig to build a preset achieving this feature. 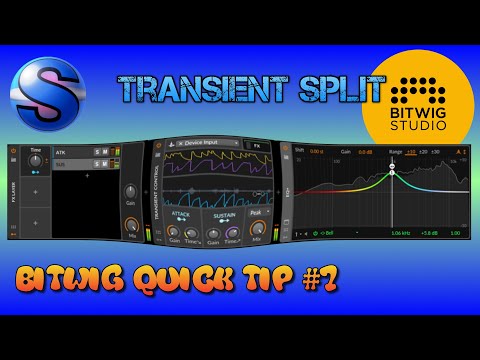 Technically yes, but without the advantages of a native device (see above).

In theory yes (examples of plugins are welcome).

Not that we aware of. Some VSTs allow to use their own selection of effects on transients/sustain but not arbitrary ones (e.g. Eventide SplitEQ - and ClipShifter).

Synthorial DE recently did a tutorial (in German) for Bitwig on this.

With an FX Layer + remote controls it can be done, but one might loose some of the visualisations.
One way to resolve this nicely could be to have device-chains in Transient Control device and everyone is happy

yeah that would work well too. I initially thought of a container as it would be consistent with the existing splitter devices (mid-side and stereo).

IMO the preset is at the same magnitude of complexity as the requested device would be, so I don’t think a dedicated device is needed.
Moreover, I can give you all a little tip : A few months ago I switched from using the devices panel to using only presets, meaning that I saved the default presets of some devices with the name of the device itself, plus a lot of other presets, layers groups, grid patches, and even VST presets, with meaningful names, then I organized them in various presets folders I created, and now I’m wayyy more happy like this…

Theoretically, all other split containers (Mid-Side split, Stereo split, Multiband Split) can be built with a FX layer and a few native devices. However having them as simple containers, with easy access to the split chains, just makes them way more convenient to use as opposed to have to navigate the inners of an FX layer, which is very important when a track has several other devices and a mix is in advanced state. My feature request is purely about extending this convenience to the transient split by taking into account that:

And yes, I think that keeping things organized is a great tip, but I’m not sure it applies to this use-case.