When editing an automation envelope, it would be helpful if the label of the parameter was shown instead of a percentage. It would make it easier to automate to precise values, especially for discrete parameters like oscillator shapes. If you’re automating a filter cutoff, it would show the frequency in Hz instead of percentages. When automating a delay, it would be ms and some parameter have names like the shape of an oscillator with “saw”, “sine” etc.

Automation lanes always show percentages, which in many situations are not the most useful value. The interesting data can only be seen in the devices or modulators being automatized. 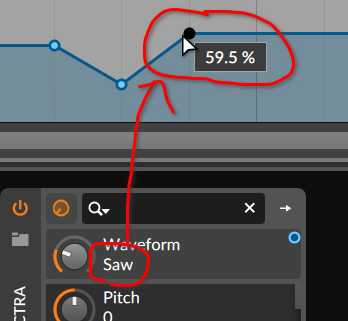 Here’s what it looks like in REAPER when automating a synced delay. In the screenshot, the point is placed at an eighths note delay time which is accurately shown in the overlay.

Bitwig offers a polished user experience. This is a detail that would increase the quality of this experience. Easier automation makes for more creative compositions.

No, but these values are already available in built-in devices. This probably makes it easier to reuse these values in the automation lines.

I’m not sure I understand what you mean. Could you post a screenshot from Studio One?

With the modulators I meant Bitwig.

can’t really make a screenshot with the readouts it shows when hovering over the nodes as I need the cursor to make the screenshot, but you can see that Studio One also shows the value in Hz for the Cutoff in the track window as well.

With the modulators I meant Bitwig.

Right, instead of showing +0.100 it should actually show the value like +5kHz. That would be amazing, but I think that would be much more difficult if not impossible to implement.

Thanks for the screenshot. That’s similar to what it looks like in REAPER. I made a screenshot myself and I’m going to add it to the first post as illustration.

As it turns out, this isn’t easy to implement because the VST API doesn’t give the option to ask the plugin for a label without changing the parameter first.

That means, the host only knows the label at the current playback position or it would have to change the value in the plugin while editing the envelope which could have unintended side-effects.

REAPER solves this problem by offering an custom API that plugins can implement. As far as I know, MeldaProduction and Voxengo implement this providing real-time feedback when editing envelopes. There might be others.