A pass-thru function and also a device to fire custom MIDI SysEx and a SysEx modulator device to actually modulate hardware that doesn’t support CC. Perhaps even a way to record Sysex to the track too as is traditional.

This would allow VSTs and external hardware to be controlled, edited and modulated from Bitwig using SysEx. VST as a format does support SysEx and VSTs do exist that require the host to support SysEx pass-thru such as ctrlr.org, Modulation Processor and multiple VST projects over the years.

Below is a visual proposal of how it could work. Bitwig pretty much offers all the functionality for MIDI CC already, it’s just allowing/including SysEx too. 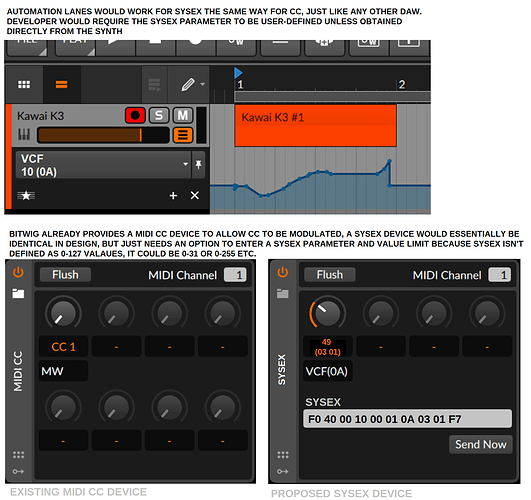 Many older hardware and even some VSTs require a bit of SysEx control but Bitwig doesn’t support SysEx at the Device/Track level, only the Controller. As soon as you pass SysEx through Bitwig, it strips it all out.

Example 1
Imagine you want to control the VCF Cutoff on an old Kawai synth. You can’t do that using CC, because Kawai synths only recognise CC for Modulation, Portamento, Volume & Release. To control the VCF Cutoff you would need to send parameter 10 (0A), value 49 (03 01) so the SysEx would need to be output from Bitwig on the Kawai’s midi channel as e.g. F0 40 00 10 00 01 0A 03 01 F7 and each increase/decrease in value send the next SysEx just like is required when using MIDI CC. This would be a classic way to do it from Bitwig automation lane.

Example 2
Likewise, you might want to simply modulate the device rather than automation lane, so you would need a MIDI SYSEX device to do that.

Example 3
You often just want to send some SysEx to a synth manually too in order to set something up, select a mode, patch, special command etc. Of course, you can use a 3rd party too like MIDIOX, but then it would be nice to just fire it all from Bitwig instead. Logically, it would need to be a device, just as we see in the existing MIDI Song Select or MIDI Program Change Devices for making ad-hoc changes.

Bitwig has released packages celebrating the early age of analog synths. The modular crowd, tinkerers and experimental musicians are also a target audience for Bitwig. This feature would bring better support for the actual synths being celebrated, connecting that hardware with all the musical possibilities that Bitwig offers.

No, if there isn’t a CC alternative (e.g. most Roland & Yamaha XG synths extend Midi CC) it’s not controllable from Bitwig.

As far as I have researched the API only supports SysEx within the midi controller scripts, there are no support classes within the API on the VST/Audio engine, arranger or device panel.

Could it be provided by an VST or something else reasonably integrated with Bitwig?

A post was merged into an existing topic: [Draft discussion] Support MIDI SysEx at the device / track level