Bitwig doesn’t run on the Ipad, which is a top selling tablet.

Bitwig has a touch interface, but only for Windows tablets. The IpadOS is growing its mobile music user base.

This would expand Bitwig’s use case scenarios to include mobile setups which focus around the Ipad hardware while expanding revenue potential.

Owners of Apple computers can use Bitwig on iPad to a certain extent, by mirroring it. You still need to have your Mac desktop device around.

It is possible to use Sidecar and also Ipad-based controller apps to run Bitwig on the iPad. With Sidecar you lose multitouch and with the apps you‘d have to spend a very large amount of time to go beyond basic functionality (to program them and probably program a script to go with them or adjust them to a Mossgraber script). 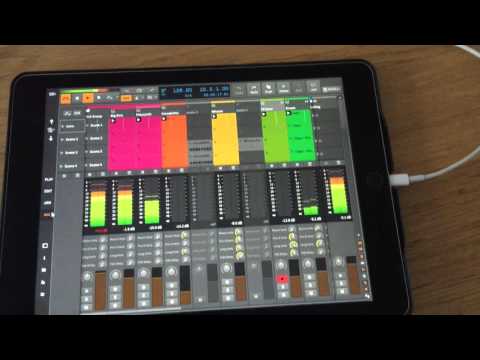 Use an iPad as a second display for a Mac

With Sidecar, you can use your iPad as a display that extends or mirrors your Mac desktop. 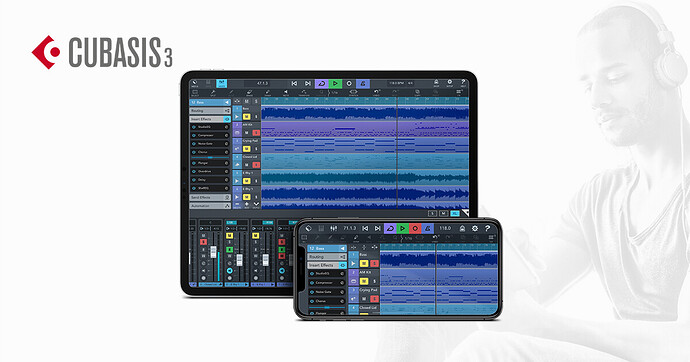 Enjoy performing, recording, mixing and sharing your music in no time, wherever you are, right there on your iPhone, iPad and Android smartphone or tablet.

It’s good to dream big, I want this too (rly bad) lol… I can use bitwig on my ipad via sidecar but a native version would be amazing, despite all the limitations. I’d also pay handsomely for it.

vote it up then B, and im not sure how limited it would have to be really. With the capabilities of the most recent ipads especially the M1 chips in them which match the same chip that is in the latest macbooks (if your able to keep your ipad cool enough) especially when you consider how efficient apps and arm code operate (so i hear). i think the main limitation would be 4gb ram per process (maybe per app, not sure) but that can be overcome by dividing out lumps of functionality to another separate process or app and then integrate it with AU or IAA. they will only be getting more powerful and eventually not long from now desktops wont serve much purpose outside of intense computing purposes and even then you could just throw another tablet into the mix for purposes like music

i mean limited in terms of plugins etc. - i‘m out of votes rn but i‘ll definitely vote for it when we get new ones

I believe the limitations here are not about hardware and not even about topuch UI (Bitwig already works on Windows tablets), but about programming languages supported on iPad OS. Bitwig is probably written in… Java? Some C++? The iPad SDK doesn’t support any of these languages, and therefore a Bitwig for iPad would be essentially a full rewrite.

I have no idea about which language is used to develop Cubase, and Cubasis is offered for iOS, Android, and Chrome OS, and they also support tabled and phone format. Most probably this means that Steinberg had the muscle to rewrite the UI and functionality for these operating systems and devices.

Being Bitwig a small shop in comparison and not having the number of users of major DAWs, I’m not sure at all this would be a good business investment for them.

Meanwhile, has anyone tried running Bitwig on an iPad using Sidecar, Lemur, Touchable… these apps that mirror on the iPad programs you’re running on your Mac?

I would love a Bitwig controller app for iOS like Logic Remote!

I would welcome an iOS version, but I want the controller app more.

I disagree about it not being a good investment for them. You very well may be correct, but chances are equally capable of being the flip side of that coin and actually turn out to be the thing to bring them the attention that they need and function as propulsion for the company. There’s always risk in business, but where there is risk often is where there is the most potential to be found and id say that is generally true everywhere in life. There is not near as many competitors on the Ipad and the Ipad music ecosystem itself I really think would benefit from an app such as like bitwig, as far as i can tell theres actually a decent chunk of space that leaves a gap in the market when i think of the current options and their functionality. there is no ableton or maschine the closest i think is beatmaker 3 but thats very focused on sampling more than the patterning method or heavy modulation. If they were to make the app im confident that it would at least be in the running for the place of best DAW on ipad, which if that were to be the case then would potentially and very likely bring very good publicity and therefore more customers to become a feedback virus system as it spreads. all the while at the very least adding entire new product and resulting revenue stream, and it just might be exactly what bitwig as a company really needs to pull forward competitively bringing in more people to show so to see it for its value and future potential and to pull out from the shadows of the daws who wear familiar faces and slowing their pace of progression in their age

The good news is that we don’t need to agree here on what makes sense to Bitwig’s business. They will make their choices.

I just wanted to stress where (I believe) the complexity and constraints of this feature request lies, which is not on hardware performance or form factor but on programming languages and Apple Store restrictions.

Still, this is a question for iPad owners (I’m not one of them):

Meanwhile, has anyone tried running Bitwig on an iPad using Sidecar, Lemur, Touchable… these apps that mirror on the iPad programs you’re running on your Mac?

First hand experience with these apps would be useful information for the description of this feature request.

I would love a Bitwig controller app for iOS like Logic Remote!

This is a different request, right?

Bitwig leans heavily on the modular & hardware target audience which very popularly own an iPad.

Very powerful mobile audio interfaces with DC coupling support iPad out of the box which will make it even more valuable to have Bitwig on there.

Developing a separate Bitwig project for iPad is a big and yet still very worthwhile task.

Huge upvote from me.

I agree completely, similarly I just wanted to provide an opinion on the other side to be considered. and I have duet i will test out and see how that goes, i think that it should work but i only paid for the tethered version since the wireless is expensive. and if its agreed by the community i dont see why we cant change the feature request to a remote controller app, i actually considered making a 2nd request for that when i made this one but thought that if this isnt very desirable then we could just change it to that. thoughts?

I‘ve used sidecar and also ipad-based controller apps. It’s ok but with sidecar you lose multitouch and with the apps you‘d have to spend a very large amount of time to go beyond basic functionality (to program them and probably program a script to go with them or adjust them to a mossgraber script)

for a small additional cost

I would leave this to the Bitwig team to decide. Or at least I would add it as a comment as something that could be an understandable measure.

with the capability to easily transfer projects to the desktop version

I don’t think the projects created with the iPad version would be any different? They might need to be simpler due to UX restrictions, but still the same type of file format.

Owners of Bitwig can download the app and within it supply their license code to verify their ownership of the desktop version of Bitwig which would allow access to an in-app purchase for the ipad version as an additional tool.

Same as with the additional cost bit above, I would leave this to the company because it is purely a business decision. Another way to approach this business could be to have the same model they already have: full app for free but you can’t save projects. If you want to save, then you need to provide your Bitwig license.

Aren’t these file formats supported? If not, I think supporting them would belong to a separate request because these formats are not exclusive of iPadOS.

Here’s my opinion on this: exactly because recent iPads basically have same powerful chip that other Macs have, Apple should rethink their split of OS and merge iPadOS with MacOS at this point. It’s not Bitwig’s (or anyone’s) problem to rewrite the whole app just so it can run on different OS even if it’s running on same chip of same company.

iPads currently are severely limited in what they’re actually capable of because of this division, and I’d rather push Apple to stop being stubborn about it and forget about sticking to more than decade old Steve Job’s criticism of Windows bridging the gap between PC and tablets (as if it was somehow a problem).
That criticism was only valid in terms of portability to performance ratio. ARM chips were more energy efficient than x86 CPUs back then as it is now, but still they would not be able to match up to performance of a laptop even, so solution was to have lower expectations so to speak, of what you could do with it, build a whole different ecosystem of apps that would rather focus on form-factor convenience than it’s raw performance. Apple themselves just proved with M1 chip that this is no longer a problem or compromise that needs to be made.

@jescofield If you can address my questions above, I will be happy to get this request ready for #features

Let’s have this request related to the current situation with iPadOS. If the situation in Apple land changes, the request will be still valid, even if then is “only” about publishing it to the store (probably not, because even if magically the software would Just Work, it would need special testing, some reorganization of plans in the Bitwig roadmap, and I bet there would be a marketing push around it.

(If someone can volunteer an image for this request, like Bitwig mirrored or Cubasic, it will look good in the description and also in the main page when this request is being featured.)