It would be nice to have a dedicated “sequential switch” module in The Grid. Something like an 8x8 grid (preferably adjustable via the device inspector) with inputs and outputs. If, for example there is an 8x8 grid of squares, highlighting one of the squares would make the connection.

And we could have modulation inputs for shifting the matrix via x and y, as well as inputs to shift the individual rows of the matrix. Or another cool way to use it would be if we could save snapshots and sequence/modulate between them.

The split and merge modules can already be used to make sequential switches, but I just think a simple to use grid of squares with customizable size and corresponding ins and outs, with the ability to shift the modulations via xy, as well as save and sequence between snapshots, would be nice.

Improved method for sequential switches over the split and merge modules and/or logic.

sequential switches such as the WMD sequential switch in Eurorack, or the VCV rack Router in VCV rack, are useful modules in modular setups, and would just be a nice addition.

You can build sequential switches with the split and merge modules, or with logic, or using a combination of both. But, to get one with a good usable x/y matrix requires a lot of connections, and is very clunky compared to what we would get with a dedicated xy sequential switch. And, a dedicated one would be much simpler to use and could have more features than are possible with one built in the Grid.

For an example, see How to make an x/y sequencer in Bitwig's "The Grid" - YouTube. 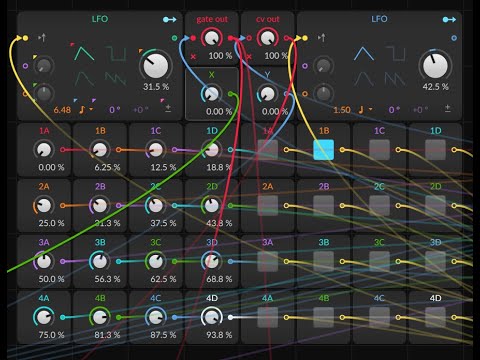 VCV rack has a nice one, called the VCV rack router. You could send multiple outs to it using the dc offset technique, and route the ins into audio sidechains, but it is tedious.

another example can be found in Usine:

I’ve never seen “Panel Matrix”. I think there are many different kinds of implementations of this kind of thing. The main feature I was hoping for in this type of matrix was being able to sequence the assignments via x/y modulation, sequence snapshots, or preferably both. I don’t know what the best terminology is, but I’m looking for something more for sequencing/ modulating the routing of modulation, than typical modulation matrix that you would find on synths. The main software equivalent I know of to something like this is VCV rack router

I’ve made several patches with matrix style grids that you can modulate x/y in the Grid before, and I was thinking of trying to adapt them to set up something like this, but I don’t think my way of making an x/y grid would work well for this, especially for things like sequencing snapshots, and resizing the matrix. Also, the way I have visual feedback for it is by assigning the lights on buttons to turn on, but if you are moving many assignments on a grid, the visual feedback of it wouldn’t work well.

This is an example of a patch I did with an x/y grid:

That patch is used as an x/y sequencer. But only 1 position is selected at a time. Like I mentioned above, I get the visual feedback on it by having the buttons light up whenever their position is hit. If I could have 16 x/y points that were color coated, it could be adapted for how I want to use it, but it isn’t possible. Unfortunately, you can’t make the knobs light up either. If we had resizable matrix grids, they could be used for al kinds of stuff.

But back to the original idea, the main thing I want is a resizable matrix with ins and outs, with each box indicating a routing. These could be indicated by color coated lights. Then, the fun part is being able to switch the routings by modulating via x/y, shifting individual columns and rows, and sequencing snapshots.

I see, well in this case I’m not sure how relevant matrix presentation is, I’ve played around with stepped phase displacements, and it also can do interesting repeatable or semi-repeatable patterns.

That looks like a cool way of setting up those types of matrixes. I hadn’t thought of doing it like that. Just looking at the screenshot, It seems like the setup doesn’t require nearly as many steps as my x/y sequencer. I’m not sure if it works the same though. I don’t see x and y modulation input controls from looking at the screenshot. It looks more like it is playing the steps sequentially.

Anyway, for the idea of a sequential switch/matrix, I was just showing the x/y setup I had done to show an example of an x/y grid in The Grid. It still doesn’t really work right as way to get the kind of “sequential switch matrix” that I was hoping for. It would still be cool to have a dedicated matrix with ins and outs, that can have the routings switched with a sequencer or modulator, as well as snapshot sequencing. It’s not by any means one of my top requests, but I just wanted to through it out there as an idea for a future module, since these kind of things are fun in modular setups.

basically there are many ways to use Matrix type routing. we could have one with as many outputs as there are rows, with just select input for index to scan through columns. or we cold have just one output and X,Y select inputs. I think in second case it’s a lot less work to implement with existing modules at the moment. for the first type, there could also be mixer type with various ratios of inputs and outputs, more like what Usine have.

The way I had in mind was something like 8 inputs and 8 outputs (preferably re-sizable). Again, the modulation I would think would be fun to use would be shifting the whole thing by x/y, shifting individual columns and rows, and shapshot sequencing.

@x.iso are you ok with the current description or would you like to add anything?

Usually I would prefer to have requests formulated in a way that is simpler, and I help whenever I can. In this case though, I reckon I get kind of lost in the details. On the other hand, the fact that there are several Eurorack implementations shows that, if Bitwig is interested in this request, they (and other Bitwig users interested in this feature, would have many references to consider.

This is why, if/when you both are ok with the description, we can move this draft to #features.

personally, I’m still not sure if this is correct to ask for quite specific matrix module. I did share my thoughts on matrix modules, but original description is about something different. I think we would definitely benefit from some sort of Phase module with X/Y controls and columns/rows division settings, so then you can just use linear Gates module and have it divided as a matrix.

The other feature that I think is important is being able to create, and sequence/modulate between snapshots.

Also, to be clear about x/y control. The type of x y control that would make sense is not the same as the x/y control that is on the x/y sequencer that I posted above. With the X/y sequencer, I only have it set to move 1 point by x/y. For a matrix based sequential switch, we would need to shift the whole thing by x/y, as well as specific columns and rows.

As for what to call it, I don’t really know much about the terminology of software vs eurorack/modular. But, in Eurorack, they are called some sort of combination of “sequential matrix”, “sequential switch”, “sequential matrix switch” or “sequential matrix router”. The word “Switch” is used because they switch the routings the routings (just like the split and merge modules in The Grid). Sequential switches in Eurorack can work both ways, in that they switch input and output destinations. And, obviously, matrix refers to the matrix. But, these are a specific type of matrix that is popular in Eurorack. When I usually think of just a “matrix” in a synth, I would usually think of a normal modulation matrix that is not able to be modulated or sequenced, just like you find on most software synths. The thing with matrix based switches in Eurorack is that you have an x/y matrix, and can switch the routings with a sequencer by x/y or by snapshots.

So, I’m thinking somehting like “matrix based sequential switch”, or “Sequential matrix switch/router”. Let me know what you think.

I suggest we leave the description as is. This feature request is quite specific. It won’t make it to the most requested features anyway. If it catches the attention of the Bitwig team, they will understand it and have an idea about how to implement it.