Request to add 3-way switch in inspector panel for any XY-pad modulator or module with following modes:

with Relative movement being default as it’s easiest to use.

Additionally, Shift+click/tap or left+right click, or combination of all these should work for fine adjustment of dot position. Currently there’s no such behavior on this specific UI control type.

Everywhere across Bitwig when you see XY-pad, there’s always a dot that you have to grab precisely in order to start moving it around, and as bad as it sounds already, in some cases this dot is way too small even for quick mouse handling. But for the most part it’s almost unusable for fast reliable touch input.

here are screenshots of such UI elements for reference: 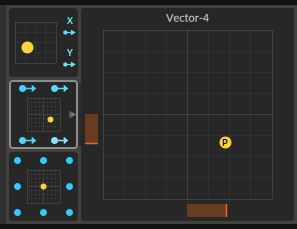 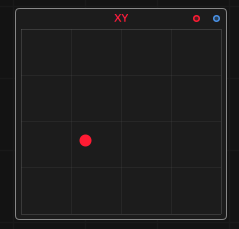 In terms of looks there’s no problem really, it’s just the way you control the dot. Generally in any other XY pad interface in other software there’s either absolute or relative movement when you click/tap anywhere in the pad field, as it’s a much easier way to interact with virtual controls. While requirement to grab onto the position dot potentially helpful to avoid accidental parameter adjustments, I don’t think this should be default behavior. It’s such a pain to use that seems like it’s either made to be modulated and/or experimented with initially and then left in specific position.

Doesn’t seem to conflict or add inconsistency with anything currently.

External XY controls can be made with variety of tools, but that’s not the point here.

Pretty much any XY pad in any product works in described way instead of how it’s currently implemented in Bitwig. Ableton’s XY pads, Usine’s XY pads, TouchOSC, etc. It’s much harder to come across examples of XY pads that behave like in Bitwig.

I think what you are suggesting would help with that too.