Having a possibility to use a menu item/shortcut to “explode” a Drum Machine with its pattern into a group, containing separate tracks for each pad, with corresponding note patterns for said items on separate tracks.

Drum machine is a very flexible instrument to work with in regards of creating coherent patterns, but not so flexible for mixing and bouncing to audio. It is impossible to group several pads to process together without creating additional buses and rerouting. It is not possible to bounce individual pads to further work with them as with audio events.

Bitwig puts an emphasis in fast workflows. This feature would provide an easy and fast solution for a workflow that is currently possible, only in cumbersome manual mode.

Yes. If you hold Alt and drag a pad from a Drum Machine into a separate track, it will create said track, extract the note pattern for this pad, and create a clip with said notes on the new track. However, it will also create an instance of a Drum Machine on a new track, with just one occupied pad on it - the one that you have dragged from the original one. So it requires an extra step of moving the item from the pad to the beginning of a chain, and deleting an obsolete empty Drum Machine. Also, this method requires to apply this process for all the occupied pads.

Here is the demonstration of a manual workflow for a single pad: 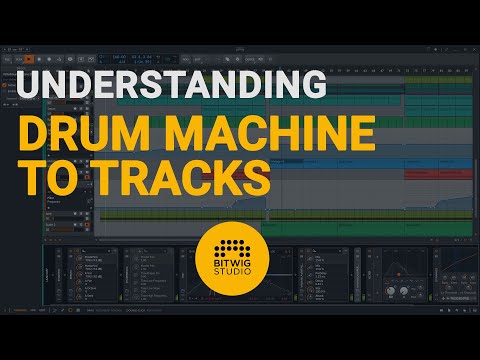 This would be a godsend. My current workflow is kind of clunky, centered around copy/pasting a lot of devices which results in higher CPU overhead than is necessary. It would be much better to be able to output these into separate tracks with the ability to group tracks together so that cymbals, toms, snares/claps, and kicks can all get identical processing without redundant device/plugin usage.

A post was split to a new topic: [Draft discussion] Splitting Drum Machine into separate tracks

This is a big one for me! I used to use this on Studio One.
During the creative process you put everything into one clip but when starting to arrange you want to see easily which sounds are being introduced or removed.
Exploding all pitches of a clip to separate tracks would make this be possible with the benefit of easier mixing.