When Bitwig records automation - doesn’t matter whether it’s into Arranger or Clip Launcher - it always records it as ABSOLUTE, i.e. as if you moved a knob /slider / xy pad yourself. You can also add a Macro modulator and Remote it to record RELATIVE modulation of the knob /slider / xy pad but it’s still ABSOLUTE with regards to the Macro modulator.

Why is this an issue? Consider following example: 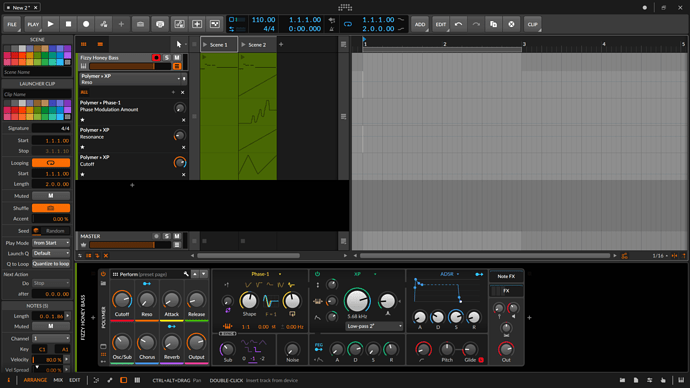 There’s 2 scenes, 1st contains automation and 2nd doesn’t. If you play the 2nd scene to the end and go back to the 1st one, it will sound nothing like it did originally (notice all parameters are at opposite end of where they started) which sometimes might be desireable, but sometimes not.

One solution is obviously to set static values as automation of parameters for 1st clip, but that might be a lot of work in some cases. The other is to use RELATIVE automation, i.e. ADDITIVE or MULTIPLICATIVE, but you can only draw those in and sometimes just capturing a performance is much better. So, the obvious solution would be to allow us to choose to record ADDITIVE or MULTIPLICATIVE modulation, instead of ABSOLUTE automation - in such case, the device’s parameters always stay intact, but if a clip has ADD/MULT modulation, then it will sound different, but coming back to “empty” clip “resets” the device to default state.

(Describe your feature request in a way that a Bitwig newcomer can understand. Optionally, fill the sections below. If you don’t have time now it’s ok, you or others can work on this draft later. For more information, see Writing a good feature request)

What is this feature about?