UPDATE: Bitwig had officially retracted their intention to have separate paid add-ons, and packed Spectral Suite as 4.4 update, as community wished!

If anyone managed to miss the big reveal, Bitwig just introduced first ever add-on with few ‘specialised’ Spectral devices. Really good stuff actually, but the obvious problem is that it’s not a free add-on, on top of that you need to be at current version to have add-on in first place. So this rises a lot of questions, because just as precedent this means whatever future plans may be, prices will go up for consumers in the end.

So let’s share our opinions here calmly via this poll.

My personal opinion is that there should be ways to pay Bitwig more if you can afford, but without paywalling devices or features. It also would be a bit different matter if we had tools to build native Bitwig devices ourselves, and could also sell them or share for free via Bitwig store with a cut going to Bitwig devs. I’m already tending to buy upgrade plans in advance (stockpiling them) if I’m really happy with their updates, but would be even better if there were more ways to basically ‘donate’ developers or tip them or however you want to call it. But entry point should be fair and affordable for everyone.

Also, one of the main points brought to light is this sudden transition: 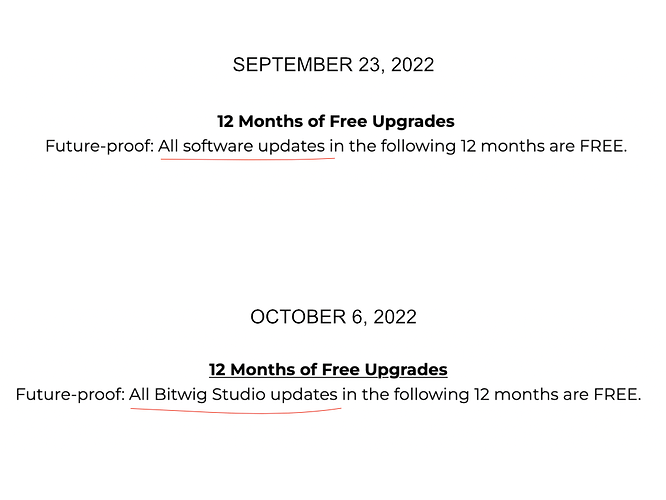 The thing is, if someone got upgrade before this change, they expected device additions and updates as part of overall updates (hence ‘all software’), because that’s what we always got so far. If they felt the need to transition on separation (althgouth not everyone wants that, which is a separate issue) of device development and core DAW feature updates, then it should’ve been done as announcement and with some solid plan on how to transition to that model, so that users get what they were promised at the time of purchase or at least activation of the license/upgrade.

If they don’t acknowledge they went against their promises and give us everything they deserve a long running campaign letting everyone in the world know they are liars who deserve no further purchases.

For me the biggest problem is that we now effectively get multiple versions of Bitwig. For each “add-on” the version will explode. For 2 add-ons there will be people that 1. have no add-on, 2. have the first add-on, but not the second add-on, 3. people who have the second add-on but not the first add-on, 4. people who have both add-ons. In general for “n” add-ons we will have 2^n different versions.
Patches will not be exchangeable anymore because of this. It is such a waste of a good thing. Now you can exchange your Bitwig patch with everyone else having Bitwig. On windows, on MacOS, on Linux… it is such a beautiful thing. Sorry let me correct that: it was such a beautiful thing.

technically we already had different versions. you don’t have access to all devices in 8 or 16 track versions, so someone sending project for collab to 16-track user would most likely not work, even if both use same current version.

but as you say, it just makes collabs harder because native devices can be in same chaotic availability situation as AU/VST/CLAP plugins. the best case scenario you could load project with all devices working, but in Demo mode, which you can only exit from by removing devices you don’t have license for. it’s at least something compared to straight up having no option other than your collab partner having to bounce stems before sending project

Yeah, Bitwig just lost all of my trust and support. My current upgrade plan will be my last. I refuse to support a company who treats their community with such disrespect and disdain.

You might be able to pull off crap like this is you were a DAW with at least ONE PERCENT of the DAW user base, but…

I think Bitwig may have gotten a little ahead of itself here with this stunt.

I think we can only make conclusion after we get some definitive answer from Bitwig, what was intended and why.

For me the big thing is the breach of trust.

honestly glad everything worked out, but I think there’s still room for user-generated paid content in the future. of course there’s a matter of moderation to figure out, but that’s a more viable option to have a way of contributing to Bitwig and community at the same time.