For now, we have pretty simple and basic input controls like macro and buttons.
They are useful as is and in most cases sufficient, but I think it could be better when even more flexible, user-defined input modulators would be introduced.

Such modulators would improve creating remote control pages (UI that user is mainly exposed to, with devices and custom presets), control modulation more precisely in some cases or even help to work with stepped automation mentioned in this case (Automation of discrete values):

The main problem is that you need to draw straight lines at fixed points that are very close to each other, which, depending on your screen size, can be a bit of a tedious and slow process. Not only that, but the visual feedback doesn’t convey any useful meaning. (…) If I have to switch from 1/4 to 1/16 on an LFO rate, looking at two straight lines with a really small distance between each other doesn’t really help.

For such a case it could be just creating an enum-macro with proper values and names, mapped to a parameter in question and viola!, automation of such parameters is not a pain anymore. With that, automation can show exact value names and precisely snap to it.

There are implementation details that could be discussed, to maximize flexibility of such a modulator but also ensure it is simple to use and not overcomplicated.

Maybe one of you has an idea for some other similar modulator or improvement? I would like to hear it!

With further analysis I came up with a more realistic mockup idea.
As there is no much space in macro itself for position labels (especially on remote control pages), it would show only division marks and macro name or name of current position value, like this:

There is a possibility to include both name and position value on remote control pages but it’s already reserved for modulation arrow and I feel it would just unnecessarily complicate code for such a case. 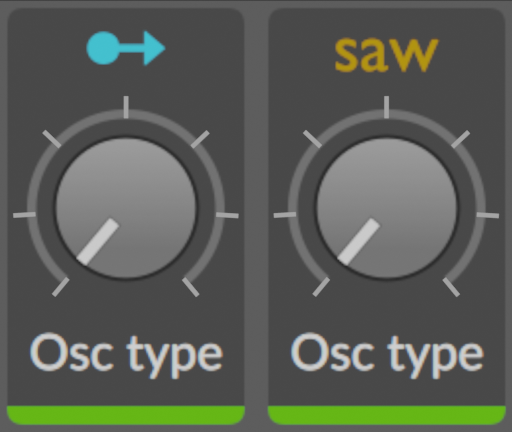 In my mockup image there is an enum knob with skipped values, I think we can ignore that idea as the user could just use the same values for this space in user-defined enum macro.

Here is my draft how controls for these macros could look like in the inspector panel: 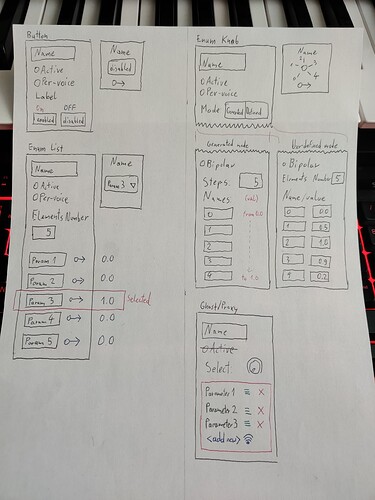 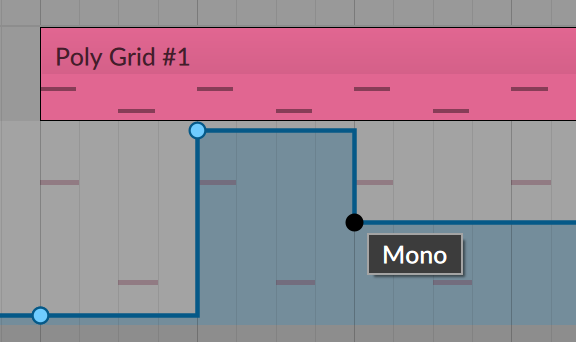 However, for enum knob-based parameters I think interpolation would be required as such parameter behaves similar to macro, but with some value-increment manner. 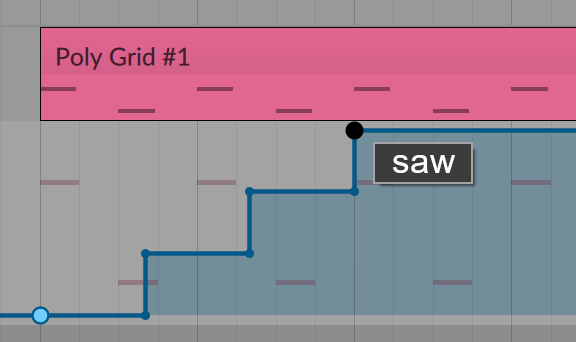 I went through the Discord’s #feature-requests channel and these are things that I found related to this topic:

Also, in addition to the main idea, I have a few thoughts related to modulator’s workflow:

With that, I think I covered everything I wanted to say.

I had exact same FR sent to them before and mentioned in Discord few times. gonna free up some votes for this when we get to draft

"Ghost" modulator - points to a group of parameters, represents only one of them at a given time, can point to a different one with modulation of some input value. It would be really useful for designing Preset/Device pages. Here is simple example

this one is a bit of a headscratcher, not sure how it would be implemented even. this goes a bit beyond what proposed here as it affects Remote Controls behavior and other things. perhaps could be solved with Array modulator idea?

this one is a bit of a headscratcher, not sure how it would be implemented even.

I could live without that, it’s just a wild idea to save some space for control pages like in Delay-2:

As you can see, Beats L and Offset L are useful only when Use 16s L is enabled. Delay L is only useful when Use 16s L is disabled. To save some space I came up with that idea of dynamic, pointer-based modulators which would occupies less space and show parameters that relates to Use 16s L parameter state.

perhaps could be solved with Array modulator idea?

There are many ideas shared here. I wonder what would be the best way to “package” them into feature requests. All of them in just one?

At a more strategic level, I wonder whether adding more modulators (or adding more complexity in modulators, the possibility to create new modulators, etc) is at odds with the idea of moving the complexity to The Grid, and then have A modulator that loads Grid patches. If Bitwig would say “interesting ideas but we must prioritize one approach over the other because pushing both is too much work”, would that make sense in this case?

There are many ideas shared here. I wonder what would be the best way to “package” them into feature requests. All of them in just one?

For now it’s just a brainstorm and I wanted to gather other users input about bigger picture first rather than just request things that in my opinion should be in Bibwig.

Whole feature request could simply be limited to two new forms of input modulators - enum dropdown list and stepped increment macro. But in addition to that I would like to also discuss other small things that could be improved in this area, for example I think ability to set default value of a macro would be pretty cool to have, on its own this is really tiny thing.

As a form of feature request I think it would be good to group these little ideas and put them in some kind of priority order as users will less likely to utilize their limited vote pool for separated tiny things like that default macro value. But that is just my side of view, I’m waiting for other sides.

for now Grid doesn’t really provide much in terms of UI building, so I imagine such ‘modulator’ would be just a mod arrow or at best bunch of them + edit button to open Grid interface.
Here the main point is being able to create custom macros that have user-friendly readings and positions when adjusted. that is having clear ‘steps’ when intended and value readouts, instead of just having 0-100% knob that doesn’t snap anywhere despite controlling parameters that do progress in steps.

as for examples, here’s a knob in Usine and it’s basic settings 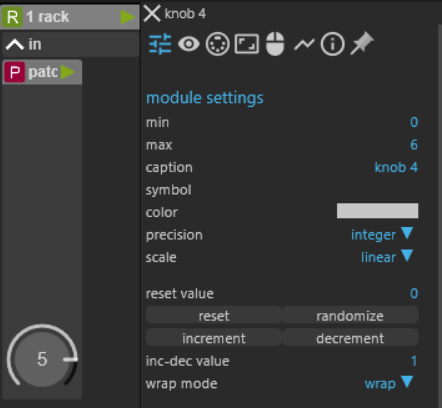 here when you set it to integer, then it steps through integers, otherwise you can set it to x.xx or x.xxxxx, etc, which Bitwig doesn’t really need to distinguish between, so I’d rather have it either work with integers or percentage with decimals (as currently is).
for macro in Bitwig I would also like to have ability to name integers if you set it in such mode.

Just collateral, but I had no idea that it is technically possible for third parties to code Bitwig modulators and a .bwmodulator file format exists. 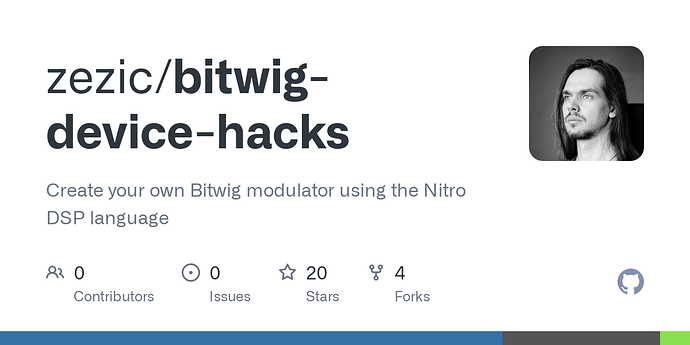 afaik it doesn’t work since version 3 (they encrypted the format or something). but this was attempt at making user-made device editor basically. as far as I understand both devices and modulators are made with Nitro, which seems to be that elusive editor of theirs that was showcased before 1.0 launch.

Macro modulator is a very simple yet useful tool that can be used in many creative ways, however current state of it is somehow very limited. Feels bad, man. After a short and sparse discussion with the community I’m coming with this list of improvements in a subjective order of importance: New enum macro, dropdown list style, fully configurable by the user. It would be useful to control device/preset behavior in a binary choice manner. [sad enum modulator] Configurable value increment …

I guess this thread can be archived/closed or something?