Couldn’t the problems described be solved by using project templates?

I don’t think so.

When I create a template I don’t know in advance how many tracks I would have on a project.

I could setup an instrument track and duplicate it instead of creating empty ones, but it’s not quite as practical, especially when the project size grows.

I just noticed that I forgot to include Effect tracks in the list, but the feature would be very helpful for those too.

Thank you for the explanation. I understand now.

But then you said…

I forgot to include Effect tracks

What is an “effect track” in Bitwig?

If I understand you correctly, you want to go to an existing Note or Audio track and “save as default”, taking all the device chain in the track (instruments, effects, modulators… everything). Is this what you mean?

Also, is the expectation to save all the device chain as default with the defaults of each device, or with whetever parameters they have the moment they are saved?

FX tracks are used for sends from other tracks. so you could have common reverb for example that other tracks send their signal to.

as for feature request, the closest thing you can get right now is dragging presets with assembled chains into empty space of arranger to create new track. like you could have a Template tag to quickly filter such presets. you can also make a template project with all sorts of tracks you need, and then drag tracks from it using side-browser: 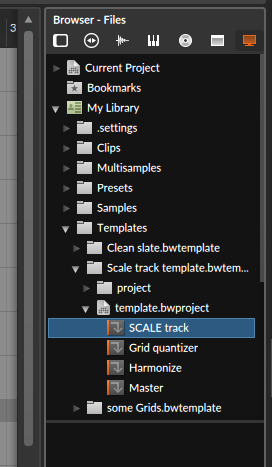 additionally, I just noticed you can bookmark location of such template project so it stays at the top for easy access 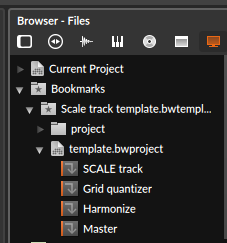 The idea to save the current state of the track (and its devices/plugins) as the default state for any newly created track of that type, exactly.

@x.iso explained correctly what an Effect Track is. I also already mentioned the possibility of using presets, but that’s not nearly as efficient as simply hitting CMD + (Shift) + T

I have reviewed the description. Please check. If nobody has any objection, I will promote this draft to #features in a couple of days.

Looks good to me