I find browsing Bitwig projects to be cumbersome with the current folder structure of projects. You have to go into a folder, and then you have to figure out what the latest version was, and then click that version to open the project.

I’d like to have the option to store projects in a package similar to the option that Logic Pro has. 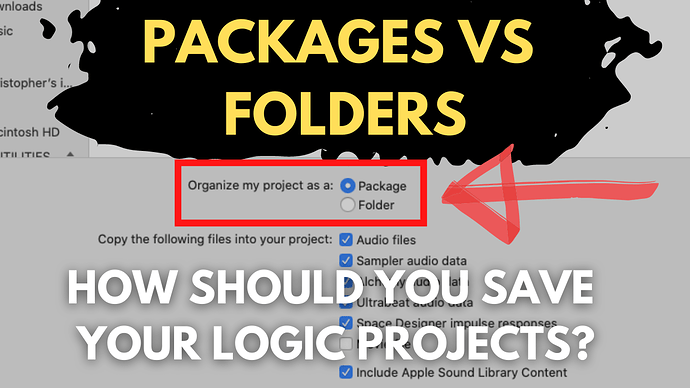 Packages vs Folders - What's the Best Way to Save Your Projects?

Should you save your Logic Projects as Packages or Folders? Is one better than the other? Does it matter? Find out the differences:

A package would just be a single self contained file that includes all of the different versions of the song you’ve worked on. It’d also include all the samples, presets, bounces, recordings, and any other necessary data for the project.

When you clicked to open the package in Bitwig, it’d load the latest version of the song and pull any data from the package.

If you wanted to open a different version of the song you could browse the package manually by right clicking on the song/package and selecting show package contents in Mac OS. Bitwig’s dashboard could offer the ability to right click on a package and it’d show the different versions of the song that you could click to load that specific instance. You could also rename versions in the Finder if you want for further clarity, or there could be an option to name the version upon saving as Studio One does.

It would be very similar to the current structure except that now everything would be self contained in a single file that’d save you time when browsing your music and provide cleanliness in your track folder structure.

It would make it quicker and cleaner to go through songs you’ve been working on. Most of the time I want the latest version of the song I was working on. Rarely do I need any other versions. However, there are cases where I’d like to see different versions or variations of the song and I want to go through and audition the different changes. In those cases I could just browse the package through the Finder, or there could be a right click option when browsing recent projects on the Bitwig dashboard that opened a sub list of versions which is how Studio One’s start page functions.

This also makes sharing a song with others to work on, easier. You just send them the single package file and they have a full history of the changes you’ve made along with all the samples and everything they’d need to work on the song.

It would also allow Bitwig to offer a new option to save new version instead of just save as where you create a new file or folder structure using the Finder. Instead you’d just click save new version, and it would either increment the current version with a number of the current version you’re on, or have a simple single input dialog box where you name the version. It would save the version into the package. The latest version would be loaded when opening the package directly, but you’d have the option to browse past versions by going through the package contents or right clicking in the Bitwig dashboard.

The only question I have is if Windows or Linux operating systems have a similar file concept as a Mac OS package or if that would even be necessary.

I don’t believe so.

Logic Pro
Studio One (S1 has a similar same setup, but it still saves everything into a project folder. The start page puts all versions into a single file and you right click on the file to see different versions.)

Packages vs Folders - What's the Best Way to Save Your Projects?

Should you save your Logic Projects as Packages or Folders? Is one better than the other? Does it matter? Find out the differences:

Save a Logic Pro project to preserve your work. You can choose which assets are saved in the project, and can also save a project as a template.

Your goal is to be able to browse project and versions efficiently through Bitwig’s dashboard, not having to rely on your computer’s file browser, right?

If users could browse projects and project versions efficiently through Bitwig’s browser, would they really care whether the files are technically organized as packages or folders? That sounds like an implementation decision, not the core of the feature request.

No not necessarily. I think it’s the opposite of that actually. I’m more interested in browsing through the native file system. I’d like to be able to still select file > open and browse songs through the Mac OS finder. It has better search capabilities, filtering, etc. I would like to just be able to go in there and not have to see a ton of folders.

The thing is it takes so much time to find what I’m looking for with this system. With the idea I suggested (one of the options Logic offers), You would just see a list of the latest tracks as a single file and be able to quickly click them to load the latest version which is what I want 99% of the time. It is 2 steps versus 5 steps in the process of locating and loading a track.

FL Studio also does something similar but it doesn’t save versions into a package. It’s saves every file with a new name basically as its own version. It’s still quicker than the Bitwig system, but i think if songs could be packages that contained versions, that would be the best possible scenario.

Let me take a look at these other requests. I’m all about improving the browsing in Bitwig, but my request was mostly for improving browsing files on native file systems with the addition of some minor changes to the actual Bitwig dashboard that would support that change.